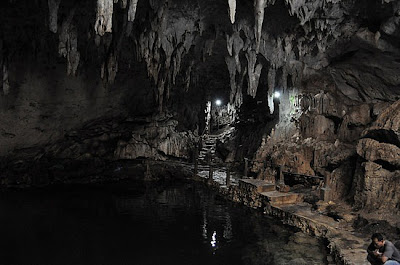 Hinagdanan Cave is a cave found in barangay Bingag, Dauis. It is a naturally lighted cavern with a deep lagoon and many large stalactites and stalagmites.

The cave is lit by sunlight which filters through holes in the ceiling. The underground lake is a popular swimming spot.

Hinagdanan Cave is made of limestone. The cave is within easy reach. You'll have to walk through dense vegetation of just about one kilometer. The entrance of the cave is a hole of about 1 meter wide in diameter, visible from a limestone hill. Cemented steps lead to the interior of the cave. The cave is slippery, but there's a railing made of rope to hold on to avoid accident due to slippery stones of the cave.

Hinagdanan Cave was accidentally discovered when the owner of the area was clearing the decaying branches of the land when he found the hole. The owner throw a stone into the hole, then he heard a splash. Then he build a ladder to get into the cave. They named it Hinagdanan, means "laddered" used to get into the cave's interior.

The cave is about 100 meters long of beautiful rock formations. The stalactites and stalagmites stick out from the ceiling and floor of the cave as though trying to meet each other. Inside the cave, there's also a lagoon with a greenish surface produced by the green limestone at the bottom of the pool, where people used to bath in the lagoon, however, it has been advised to not go dip into the lagoon because of the karst pollutants present in the water.

﻿
Posted by Pinoyborian
Email ThisBlogThis!Share to TwitterShare to FacebookShare to Pinterest