Why Bohol fiestas are held in May 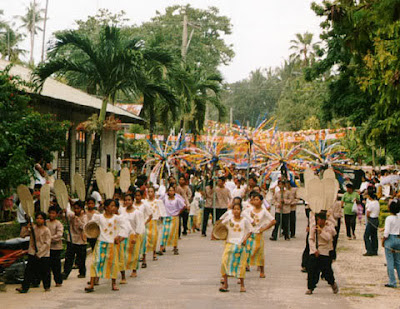 THE FIESTA month of May announces its sidling entrance with homing overloaded boats navigating the narrow channel carved in the shallows towards their berthing places at the Tagbilaran pier.

But, why May, many have asked.

Answering the question may have something to do with understanding the word Tagbilaran, the name that never is in the Cebuano-Bisayan lexicon, says a self confessed local historian in Bohol.

Tagbilaran, the place with its heart nestled on top of a thickly forested rocky hill, may have been coined from two words: “tago” and “Bila” and could be a name given by grateful natives who clambered for safety and used the forests as their temporary shelter during the raids by Bila pirates, he said humbly refusing to have his name printed.

The feared Bila pirates made annual raids on coastal villages in the Visayan islands leaving at their wakes plumes of smoke from looted villages and wails of despair for kidnapped relatives.

Riding sleek sail boats, the pirates ride the Habagat, or the southeast monsoon which would make their journey fast and thus villages are often caught off-guard.

At the sight of the pirates, the natives would climb and lose themselves in the forests on the rocky hill. There, they wait it out until the pirates leave or until the Habagat gives in to Amihan or the northwest monsoon where it would be easy for the pirates to sail back.

That time, the pirates sailboats would again ride the wind to disappear into the horizon towards Mindanao.

The bluff, which by 1720s has been the refuge of people who used the hill as vantage point to guard against the raids soon supported a cluster of homes which ultimately spread to the hill’s eastern parts, he said.

With people there, the Spanish doctrine teachers put up chapel which then became a regular visita of missionaries from the nearby parish in Baclayon.

Now protected by the pirates, the natives dedicated the place to their protector Saint Joseph whose staff also protected the Holy Family in their narrow escape from the wrath of Herod.

On the same site rose a stone church that would soon host the seat of the Diocese. The Saint Joseph the Worker Parish rose and underwent numerous changes through the years until now, he added.

“By Jesus Christ protected, by the people of Tagbilaran erected” is etched in a pedestal below the statue of St. Joseph in front of the cathedral now.

According to local fishermen, Habagat season peaks between September to December and Amihan on the other hand peaks in March to June.

While it would be inappropriate to put up celebrations at a time when the pirates could get you off guard, locals then use the peak of the Amihan to gather and offer thanksgiving to their protector.

Most Bohol fiestas especially for older parishes are on the month of May and extends to July, notably the time when the winds would prevent the coming of raiders from the south to ride against the winds.

Now, wouldn’t it be fair if people gather for festivities during the safest time of year to thank their patrons? (PIA-Bohol)

Note:
This is an interesting take on history. I first read this in Tubag Bohol discussion forum and traced the source in PIA-Bohol blog.

I've first posted this article in Bohol On My Mind blog.
Posted by Pinoyborian
Email ThisBlogThis!Share to TwitterShare to FacebookShare to Pinterest