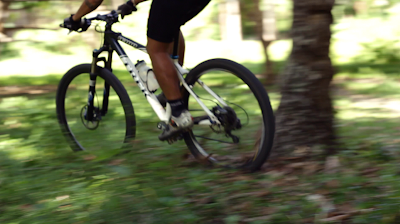 Baclayon’s myriad of rural, mountainous barangays have lent their interconnecting thoroughfares to be developed into great mountain biking trails that cater for all skill levels. There are easy and moderate trails using barangay roads, as well as the more difficult single-track caribou trails, all of which twist and turn through flora and fauna laden forests, past rural lakes where you can try your hand fresh-water fishing, and over peaks with spectacular views of the the Baclayon coastline and Pamilacan, Panglao and Siquior Islands.

Baclayon also has long off-road trails which connect other proximal municipalities, such as Loboc, Albur, Loay, Corella, Sikatuna and Tagbilaran city. As has been well publicized in the adventure magazine “Action Asia”, the most popular and longest of which is “Bong’s Trail”. This 20km off-road ride begins at Banat-i Hill, passing through Baclayon’s upland barangays and neighboring municipalities, and ends 2 to 4 hours later at Loboc River. Additionally, the Baclayon to Corella route is a 2 hour off-road ride, ending at the Philippine Tarsier Foundation, a great place to view Tarsiers in their natural habitat.

The Mango-ol Bike Park in Barangay San Isidro is the perfect lure for cross-country biking enthusiasts. The bike park is still under a steady process of development, yet it is already attracting attention from Manila and Cebu based mountain biking clubs, as well as the adventure magazine Action Asia.

Bike rentals are scarce in Baclayon, as well as nearby Tagbilaran City, so it is preferable to bring your own bike. However, it is possible to organize bike rentals, mountain biking guides, and gain further information ahead of time by contacting +63 928 197 9165 or +63 906 531 0860.

﻿
Posted by Pinoyborian
Email ThisBlogThis!Share to TwitterShare to FacebookShare to Pinterest